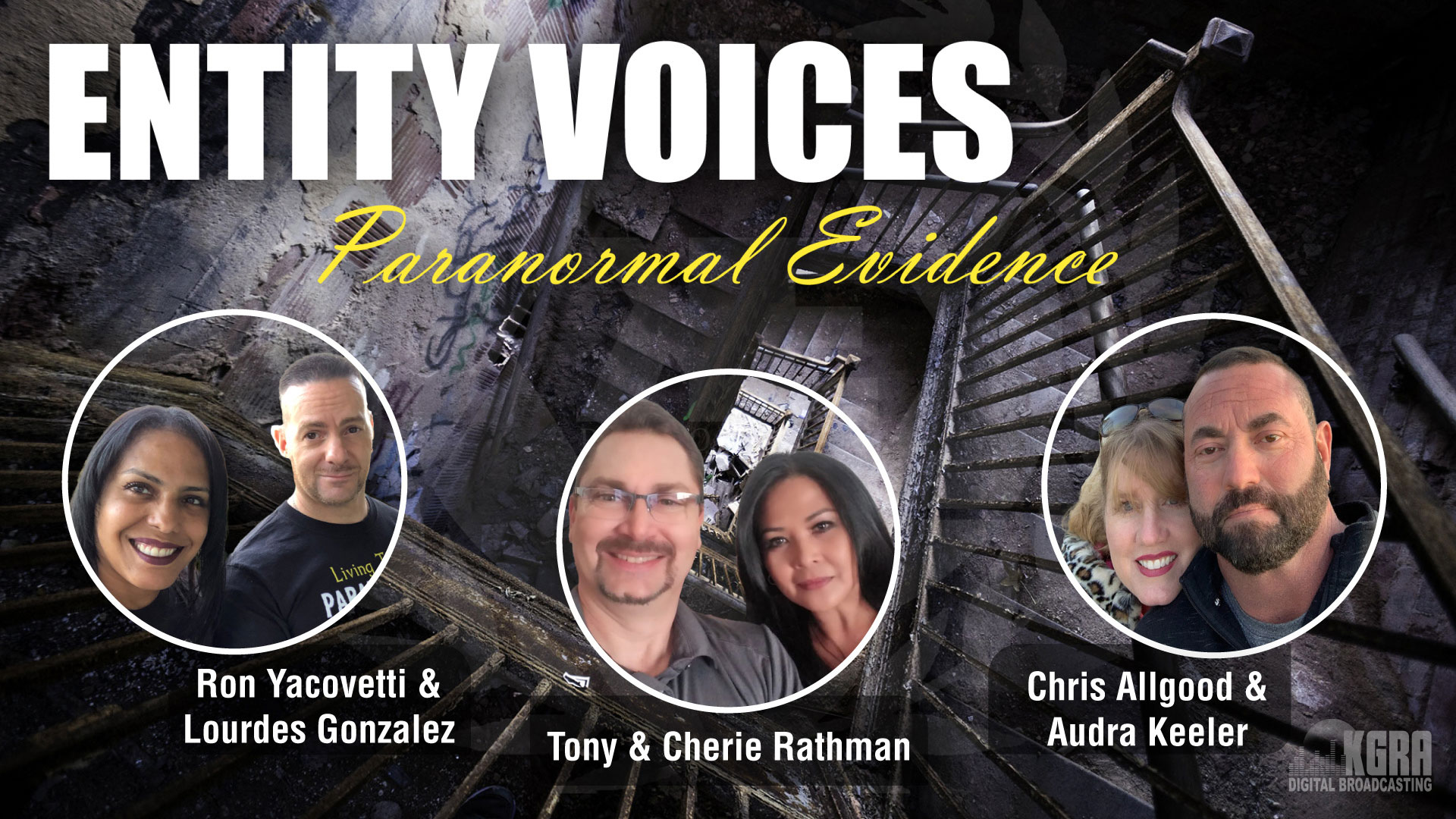 With over a decade of Paranormal Research Experience across the country and Internationally and specialists in EVP and ITC spirit communication.

Next is Chris Allgood and Audra Keeler, husband and wife paranormal investigators with over ten years of experience with police investigations and early childhood paranormal experiences.  Chris is also sensitive and brings extra value to knowing what is occurring around us.  Lastly, Ron Yacovetti and Lourdes Gonzales are a current couple who complete the Entity Voices Team with over a decade of paranormal research, specializing in Direct Radio Voice spirit communication! Together the team has well over 30 years of paranormal Experience, Education, and investigations.

The Entity Voices Team interacts with top paranormal investigators across the country, bringing their best evidence captures to the show to review, discuss, and give insights on these spectacular captures done by those in our Paranormal Community.  If you have not experienced Entity Voices Paranormal Evidence, you are missing something amazing!

Tony was a skeptic until his wife asked him to try paranormal investigation. The evidence we captured on the first attempt has led me down the path of constant paranormal research! Cherie Rathman CO-Founder/Investigator Entity Voices EVP specialist/ Photos and Mel Meter instruments of choice ten years of paranormal investigation.  Cherie grew up in the Philippines and was surrounded by paranormal activity as a child; she grew up in a haunted house and was filled with stories upon stories of paranormal activities and spirits told to her from relatives. EVPI is a Husband & Wife Paranormal Team located in Phoenix, Arizona, and has spent the last decade discovering the truths about spirits, entities, and life after death. Tony & Cherie Rathman lead professionally operated Paranormal Investigators into some of Arizona’s darkest corners and just about anywhere they travel. Our mission is to seek the truth of the paranormal.

We are a couple who work together to understand paranormal phenomena and add to a common base of knowledge in the community whenever possible. Investigating, documenting, and educating on paranormal activity is our main focus. To then share these understandings and developments with all who want to listen and welcome opportunities to educate people about the paranormal and decrease fears about the unknown. Our specialty lies in spirit communication. Through both EVP’s and ITC communication and we have captured some amazing “Entity voices” along our years of investigation and research through multiple forms of digital recorders, Parabolic mics, and multi-track records, as well as building and refining many Spirit boxes throughout the years. Our private home and business investigations focus on the state of Arizona, but we have traveled the world, investigating many historical and privately owned places with claims of paranormal activity. Most recently, the Diplomat Hotel in Baguio City Philippines, and we are always looking for new opportunities to research or help those in need across the country. Over the years of gathering paranormal activity, EVPI began to share the things we have collected and captured with the public on our Facebook site

As a sensitive child, Chris has seen, heard, and felt the presence of spirits his entire life. For more than eighteen years, Chris has investigated numerous locations, hot spots, and just about any place known to have been haunted. In 2018 he experienced a life-changing massive heart attack that should have killed him but instead astoundingly increased his sensitivity levels. Chris spent from 2009 until 2019 as a Maricopa County Sheriff’s Office Armed Posse man and has been an Ordained Minister for eight years; using this experience; he strives to make contact in any investigation ranging from famous locations to personal home investigations.

Audra has always been intrigued by the paranormal, mostly spurred on by paranormal dreams as a child. She tends to see what some do not but then focuses on proving the evidence rather than honing any abilities she might have. Audra is a social creature with the living, and it transcends into her interactions with the paranormal. She is a specialist at trigger objects and concentrates on debunking evidence to validate. Audra has been investigating with Chris as a team for the last nine years

Lourdes, born and raised in Brooklyn, New York, and now residing in New Jersey, has always been fascinated with the paranormal. Now, as a paranormal investigator, Lourdes loves to collaborate with several different paranormal teams. She strongly believes in para-unity and says learning from others and sharing what she has learned is crucial in searching for answers to the unknown. Some of her favorite places to investigate are Morris-Jumel Mansion, The Shanley Hotel, White Hill Mansion, The Queen Mary, and David Oman’s home in California, one of Lourdes’s more memorable haunts. As an investigator, Lourdes loves exploring and experimenting using a range of equipment such as spirit boxes, apps, rem pods, and K2 meters, to name a few. An in-depth minded researcher, Lourdes feels it’s essential to be open to using different types of equipment, learning new methods, and applying their collective findings to corroborate results. Lourdes’ most recent endeavor with her partner Ron Yacovetti, ITC: Instrumental Transcommunication, is using a method known as DRV: Direct Radio Voice, a technique she finds fascinating. Although she loves this new endeavor, Lourdes says she still gets blown away most of all by Class A EVP’s, recorded using an excellent old-fashioned recorder, capturing vocals out of thin air.

Now back where he’d grown up in New Jersey, Ron began investigating during his 14 years living in Los Angeles. This diversity in residence allowed him to examine some of the most notable haunts on both coasts, including The Queen Mary, The Oman House, The Shanley Hotel, Whitehill Mansion, and The Glen Tavern Inn times each. He has a unique background as a stand-up comedian, MMA and Boxing Commentator, writer, and Paranormal Investigator. Ron has hosted and interviewed in various fields, driven by a genuine love of connecting with others.

While Ron enjoys all aspects of investigating, his affinity and specificity in afterlife research are ITC, Instrumental Trans-communication.  This study area is most known in the United States for various devices seen on TVs, such as the Ovilus, Spirit Box, or Ghost Boxes. Ron has continued to use these devices and mobile apps, leaving no method unexplored.  He has spent almost two years doing innovative afterlife research experimentation, rooted in the European methodologies of ITC, known as DRV: Direct Radio Voices. These methods predate any sweeping radio or app of the modern ghost hunting movement and seemingly fell out of favor with casual paranormal enthusiasts, but not with the dedicated researchers. So, under the banner “GonYak Paranormal” with his girlfriend Lourdes Gonzalez, his ongoing DRV work has yielded very impressive results. Ron possesses skepticism and an open mind and feels that you should pursue results for any theory you may have. Period. If you have an agenda that all things are paranormal or all things are not, you’re a believer. Both are ideologies that stand in opposition to each other and indicative of what defines a believer. A Skeptic seeks absolution, not to debunk and discredit.